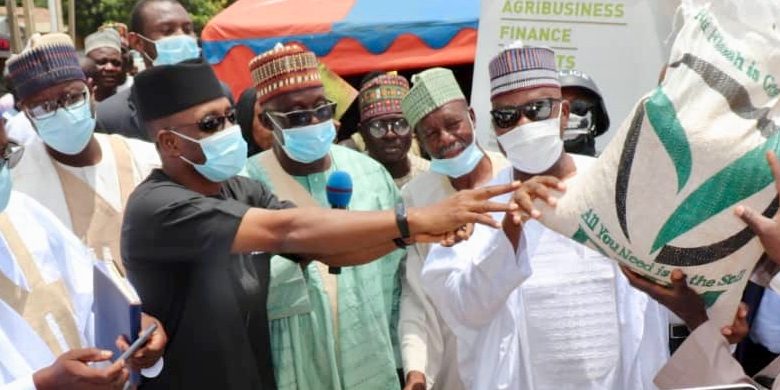 As a contribution to the Federal Government’s restoration of socio-economic stability in Borno State, the Nigeria Incentive-Based Risk Sharing System for Agricultural Lending (NIRSAL Plc) has flagged off distribution of input materials under the Central Bank of Nigeria’s (CBN) Anchor Borrowers’ Programme (ABP) to 2,987 maize farmers in the state for their 2020 wet season farming operations.

Inputs distributed to the benefitting farmers include 59,740kg of certified seeds and 35,844 bags of fertilizer. Others are 11,984 litres and 41,818 millilitres of herbicides and insecticides respectively, for which the farmers got one knapsack sprayer per hectare.

The CBN’s ABP, of which NIRSAL Plc is a Participating Financial Institution, is famous for its loan scheme given to smallholder farmers in the form of inputs rather than cash to forestall diversion of funds thereby ensuring food production in the farms. Through this initiative, the Federal Government has hit important milestones in job creation and food production, especially in the local production and milling of one of Nigeria’s most important commodities – rice.

Under this season’s ABP intervention, NIRSAL will be supporting well over 41,800 farmers cultivating over 59,450 hectares of land across the country to achieve over 237,800 metric tons of farm produce. Significantly, this is coming at a time when the CBN has withdrawn forex support for maize importation, throwing a challenge to Nigerian farmers to bridge the supply gaps.

Speaking through Mr. Yusuf Yila, CBN’s Director of Development Finance, the CBN Governor, Mr. Godwin Emefiele, made known the apex Bank’s plans to disburse N432 billion as loans to produce a collective output of 8.3 million metric tons of agro commodities in the 2020 wet season. This, he said, will ensure that the country remains on course to achieve its food security targets in spite of the incursion of the COVID-19 pandemic.

Emefiele announced that the ABP has reached 1.27 million farmers since its launch, each cultivating an average of 1.3 hectares. This reach has led to increased agricultural productivity, supported wealth creation, improved food security and made Nigeria’s agricultural commodities more competitive.

A necessity for the government’s pursuit of food security and economic development, the ABP has also become an auspicious intervention for a COVID19-endangered economy in the way it engages farmers on the one hand, and in the way it encourages import substitution – particularly of staple commodities – on the other.

The Southern Borno smallholder farmers who were aggregated by the Maize Farmers Association of Nigeria, include Internally Displaced Persons (IDPs). The farmers will also receive mechanization services to check post-harvest losses and make for maximum yield. Furthermore, to protect their crops from the menace of stem borers and the notorious fall armyworm, each farmer received sufficient amounts of micronutrients in addition to the herbicides and insecticides. A 3:1 ratio of NPK and Urea was set for each hectare and will be applied under the supervision of NIRSAL Plc’s field staff.

At the flag-off ceremony held at the Palace of the Emir of Biu, Aliyu Abdulhameed, NIRSAL Plc’s Managing Director/CEO, expressed delight in being able to support IDPs in reclaiming the narrative of their lives and earning a decent living through the gains of the ABP. In Abdulhameed’s words, “The choice of Borno State to flag-off NIRSAL Plc’s nationwide inputs distribution is deliberate, strategic and noteworthy as it is expected to increase the confidence level of the citizens as they attempt to rebuild their lives and ramp up their agribusiness activities”.

Abdulhameed used the opportunity to announce milestones reached in NIRSAL’s quest to create 16,000 Agro Geo-Cooperatives across the country covering 4million hectares of land. According to him, over 100,000 farmers have signed up for the NIRSAL Agro Geo-Cooperative® model, which is a system of primary production that invites farm neighbours into contiguous 250-hectare partnerships for the purposes of producing at scale and gaining easier access to the finance.

As in Borno, NIRSAL is deploying the ABP intervention across the country to offer 360 degrees support to smallholder farmers in line with its Agricultural Commodity Ecological Area (ACEA) map. According to the map, and for the sake of secure investments, grains are best suited for the soil and climate of states in the Upper Niger Basin, while roots & tubers as well as tree crops thrive best in the Lower Niger. Riverine states have comparative advantage in aquaculture; however, for the sophistication of its market, it is also suitable for fresh fruits & vegetables cultivation.

The ACEA map is a compass for NIRSAL in calling for and channeling agribusiness investments into physical and virtual Agro Geo-Cooperatives across the country. In implementing the CBN’s ABP for the 2020 wet season, NIRSAL is leveraging newly formed Agro Geo-Cooperatives for structured project planning and delivery. The CBN corporation believes that such is the scope of work and innovation required to bring the apex Bank’s strategic food production targets for the year to fruition – in spite of the COVID-19 pandemic.

NIRSAL Plc will continue to promote its Agro Geo-Cooperatives model for agricultural primary production, and with renewed vigour against the backdrop of the COVID-19 pandemic. With the growing buy-in of farmers into the model, Nigerian farmers can soon make a transition from an era of grants and interventions to an era of sustainable, high-returns agribusiness.