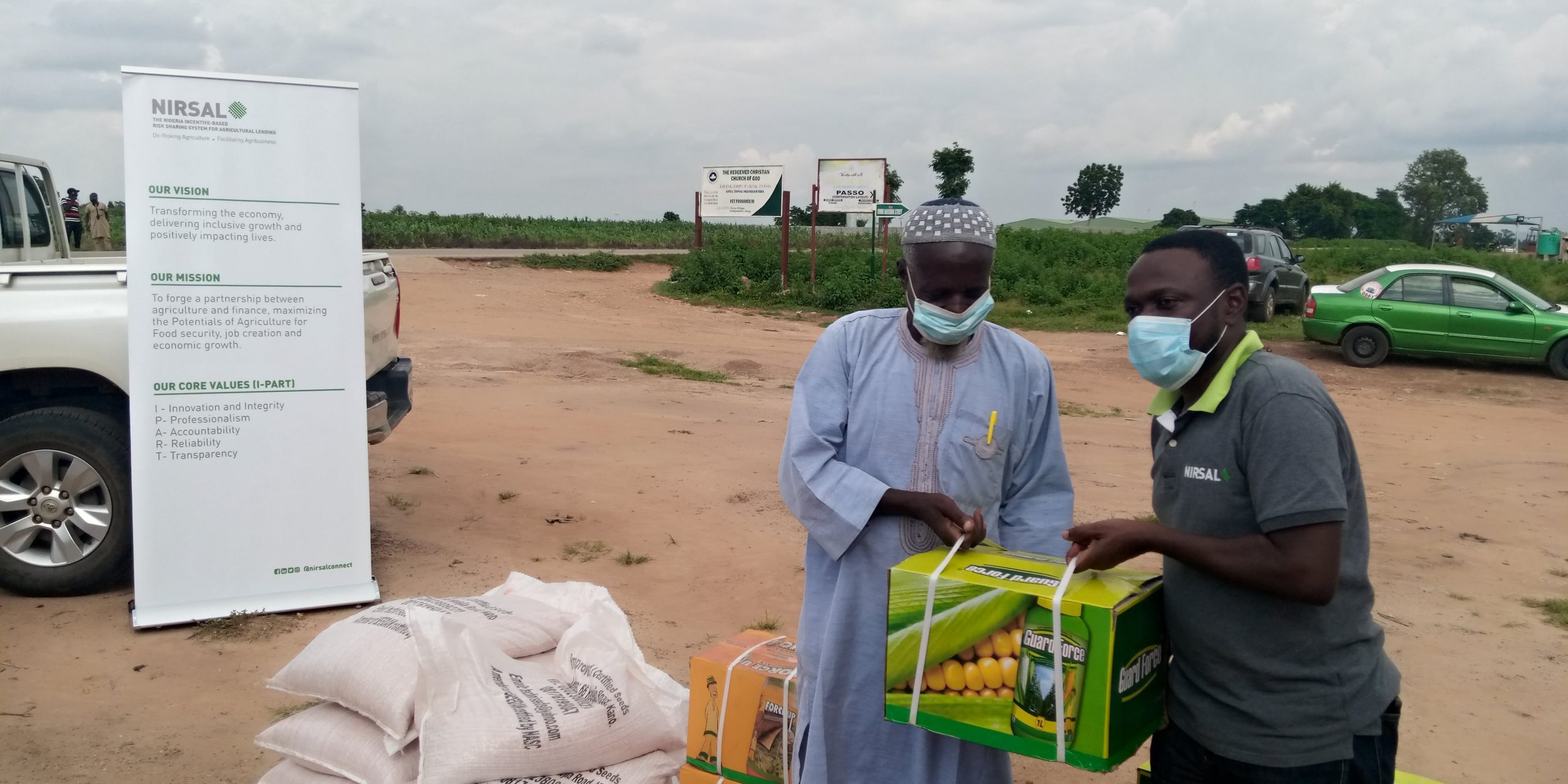 Rice, maize, cassava, sesame and soybean farmers in Nasarawa, Niger, Kogi and Benue states as well as the FCT are positioned for an increase in yields and improvement in livelihoods following The Nigeria Incentive-Based Risk Sharing System’s (NIRSAL Plc) support for their 2020 wet season farming activities under the CBN’s Anchor Borrowers’ Programme (ABP).

The development comes following NIRSAL Plc’s structuring of farmers in the FCT into 16 established Agro Geo-Cooperatives, 12 of which are included in the ABP for wet season 2020. As more AGCs develop around the territory and beyond, NIRSAL continues to provide trainings on bookkeeping & modern farming practices, mechanization for pre-planting, planting & harvesting activities and distribution of improved, high-yielding seed varieties.

NIRSAL Plc has also linked the 926 FCT farmers cultivating 1,140 hectares of land with guaranteed offtake markets thereby protecting them from price fluctuations and the exploitative tendencies of some middlemen. Other forms of support include the provision of fertilizer, crop protection products and round-the-clock technology-driven project monitoring services.

Symbolic of input distributions that occurred across the north-central region of Nigeria, some farmers in Dobi area of the Federal Capital Territory (FCT), recently received further support for their on-going farming activities from NIRSAL. They met with NIRSAL’s officials at Passo where the Head of NIRSAL’s Project Monitoring, Reporting and Remediation Office (PMRO) in the FCT, Mr. Ayo Olaleye, relayed the Federal Government’s and the Central Bank of Nigeria’s unwavering commitment to agriculture to them.

Though the COVID-19 pandemic has triggered a host of economic challenges globally, the Federal Government’s resolve not to undermine the agriculture sector is visible in the continued injection of funds into the sector through the CBN’s ABP. Moreso, NIRSAL’s Agro Geo-Cooperative® model, upon which it is performing its role as a Participating Financial Institution (PFI) in the ABP, is a demonstration of increasing multi-sectoral support to agriculture in spite of the times.

Olaleye told the farmers that NIRSAL’s Managing Director/CEO, Mr. Aliyu Abdulhameed, will continue to prioritize farmers’ needs, not just in the implementation of the CBN’s ABP, but also in the development and delivery of frameworks that will further open the banking sector to agriculture – the Agro Geo-Cooperative® model being one of them. In the meantime, he said, NIRSAL will continue to ensure that farmers get the best of inputs at the right times and locations for their production purposes.

The gathering was an opportunity for different farmer groups to meet after busy weeks in the farms to discuss how their crops are faring after planting and to confirm the extent to which they benefited from the mechanization component of the ABP in the area of land preparation. As their crops sprout and grow, the ABP, which is basically an input loan scheme, also provides for cash component that empowers farmers to weed and maintain their farms personally.

Speaking on behalf of his members, the President of the Dobi AGC, Rev. Emmanuel Afolabi, expressed his appreciation to the Federal Government and NIRSAL for their inclusion in the ABP, promising that they would ensure its successful implementation. He solicited for the sustenance and expansion of the programme to include more farmers in Dobi community in the future.

In Afolabi’s words, “We are grateful to the Federal Government for remembering us and bringing this project to us, rural dwellers. On our part, we will strive to ensure that the project is a success in our community. We pledge that we will not fail the Federal Government and NIRSAL. We are requesting that the programme will not end this year and we want more farmers to be accommodated next year”.

Also present at the gathering was Mr. Nmadu Benjamin who was representing the Head of the CBN’s Development Finance Office (DFO) in the FCT, Mr. Nuhu Muazu. Nmadu encouraged the farmers to make good use of the ABP opportunity and ensure that they repay the loan so that they can access more benefits in the future.

The sentiment has been the same across the region as Agro Geo-Cooperative leaders express delight in the tenets of the model and in the prompt implementation of the CBN’s food security initiative by NIRSAL. Trainings were delivered to selected officers of the PMRO who have been crisscrossing the region, building the capacities of farmers and handholding them throughout the project cycle to ensure that they adopt good agronomic practices that will optimize their yields, which will in turn foster prompt loan repayment.

As an institution created by the CBN to link agriculture and finance, NIRSAL Plc continues to develop and deploy bespoke, technology-driven risk-mitigation mechanisms designed to boost farmers’ productivity and encourage financiers to lend to agriculture. The support extended to farmers through the ABP is another example of how NIRSAL Plc continues to deliver on its mandate.

Since its inception, NIRSAL Plc has facilitated over N105 Billion across the Pre-Upstream, Upstream, Midstream and Downstream segments of the Agricultural value chain in Nigeria from public and private sources of finance. This finance has had a profound positive socio-economic consequence, resulting in the creation of over 400,000 jobs and impacting 2 million lives positively.