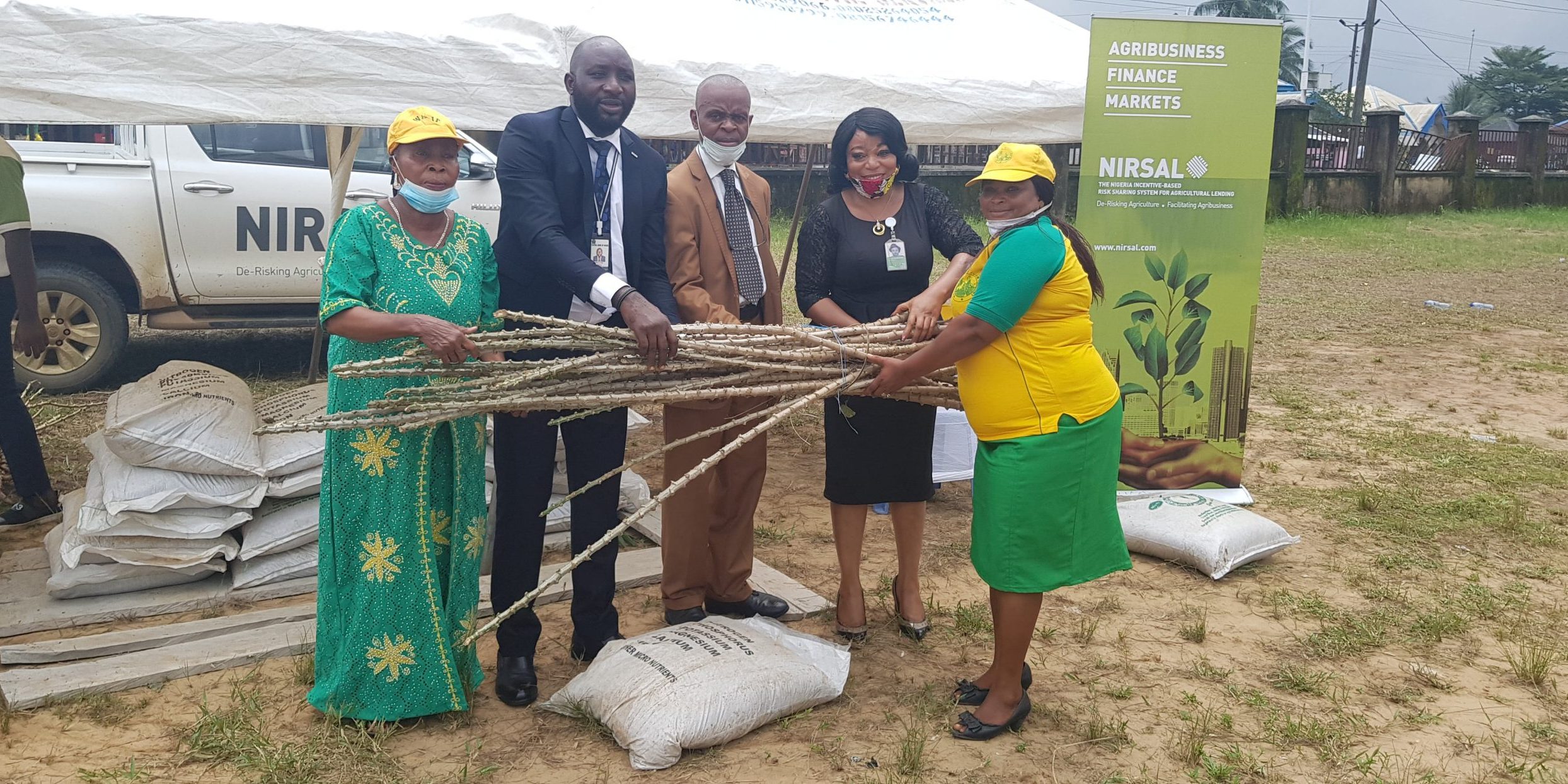 In adherence to the principles of all-inclusive growth, the Nigeria Incentive-Based Risk Sharing System for Agricultural Lending (NIRSAL Plc) is empowering 475 female farmers in Uyo for cassava production during the 2020 wet season farming.

According to its Agro Geo-Cooperative® (AGC) model, NIRSAL Plc structured the farmers into a group which was aptly named the Uyo Women Agro Geo-Cooperative. Thereafter, the 475 female farmers were trained on Good Agronomic Practices and received various inputs for their use. In addition, all 478 hectares of land will be mechanized throughout the planting season to enhance yields & profits and eliminate the drudgery of farming with crude implements.

Furthermore, members of the Uyo Women AGC will receive finance through the Central Bank of Nigeria’s (CBN) Anchor Borrowers’ Programme (ABP) for which NIRSAL Plc is playing a critical role as a Participating Financial Institution (PFI) in ensuring that the CBN’s and indeed the Federal Government’s developmental and economic diversification goals are met.

To officialize activities, NIRSAL Plc flagged-off the distribution of inputs to the farmers during a ceremony held at Anang People Primary School, Obio Ndot, Oruk Anam LGA of Akwa Ibom State where Mrs. Theresa Thompson Akpan, the President of the Uyo Women AGC, described the CBN’s support through NIRSAL as a milestone in enhancing cassava production in the state.

She tasked farmers under the Uyo Women AGC to embrace NRSAL Plc’s approach of farming as a business in order to move from peasant farming to sustainable agribusiness. She thanked NIRSAL Plc for harnessing the female farmers’ potential and for its continued support of agribusiness in Akwa Ibom State.

Speaking through Helen Akula, the Head of NIRSAL Plc’s Akwa Ibom State Project Monitoring, Reporting and Remediation Office (PMRO), Aliyu Abdulhameed, the organization’s Managing Director/CEO, noted that NIRSAL Plc’s support of Uyo Women AGC will not only empower the 475 farmers of the AGC but will create jobs for many families in the community, thereby achieving NIRSAL Plc’s mission of forging partnerships between finance and agriculture while achieving food security, creating jobs and spurring economic growth.

He added that through the ABP, the farmers’ door to commercial financing had been unlocked, thereby paving the way for a better-quality life. He however reminded the farmers that “the input you received today is not a grant but a loan that must be paid back for other farmers to also benefit from.  I have faith in you all that together as a team every kobo will be repaid with ample profit left in the bank for you to enjoy the fruits of your labour.”

Also speaking at the event, Desmond Ushe, the Acting Head of the CBN’s Akwa Ibom State Development Finance Office, noted that with the integration of NIRSAL’s AGC concept, risks will be reduced significantly, and the participation of farmers in the ABP would be boosted.

Ushe solicited for sincerity and commitment from the farmers to match that of Godwin Emefiele, the Governor of the CBN, whom he said possesses the utmost passion for the ABP and for economic growth through agriculture.

It may be recalled that rice, maize, cassava, sesame and soybean farmers in Nasarawa, Niger, Kogi states and the FCT were recently positioned for an increase in yields and improvement in livelihoods following NIRSAL Plc’s support for their 2020 wet season farming activities also under the ABP.