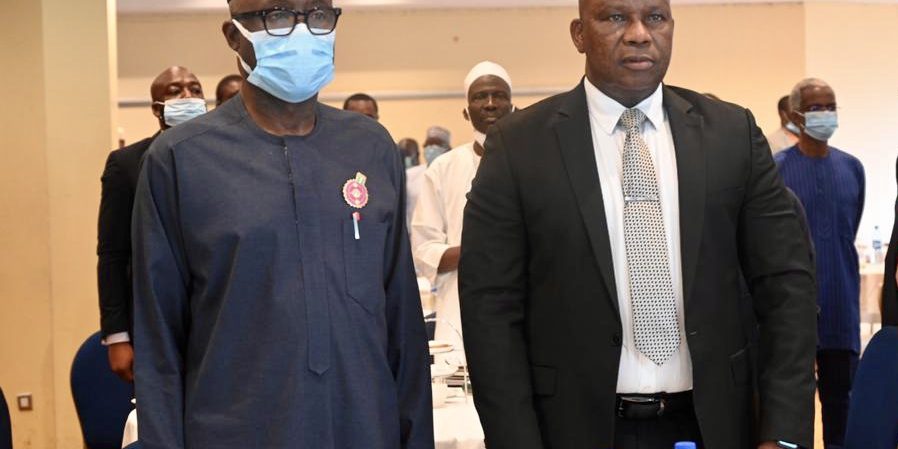 December 3, 2020, Abuja, Nigeria – In line with its mandate to fix broken agricultural value chains and increase the flow of finance into the sector, the Nigeria Incentive-Based Risk Sharing System for Agricultural Lending (NIRSAL Plc) is championing advocacy for the operationalization of a Secured Agricultural Commodity Transport & Storage Corridor (SATS-C) which is expected to combat post-harvest losses, create jobs and boost the contribution of the Agriculture Sector to Nigeria’s Gross Domestic Product (GDP).

SATS-C is currently a policy document being prepared for executive consideration by the Federal Ministry of Industry, Trade and Investment (FMITI) who are at the stakeholder identification and engagement stage.

The Ministry hosted a breakfast meeting Thursday to which they invited, amongst others, five federal ministries deemed critical to the successful domestication of the SATS-C initiative. The ministries include those of Agriculture, Finance, Transport, Interior and Justice. As advocates of an agriculture sector with efficient production, transportation and storage systems, NIRSAL Plc was also represented at the meeting by an executive-level delegation.

During the breakfast meeting, the Honourable Minister of Industry, Trade and Investment, Otunba Adeniyi Adebayo, presented the SATS-C initiative to participants, along with the economic sectors that it would positively impact if adopted and implemented. He sued for the continued commitment of the sister ministries with related mandates for the successful implementation of the proposed policy document, especially as they prepare to execute a common Client Service Charter that will enforce adherence to agreed rules and standards in a bid to accelerate the project.

Going beyond a long list of benefits of the SATS-C, the Minister elaborated that it will further provide opportunities for the simplification, harmonization of procedures and standardization of products & reforms while shortening service delivery times on clearance and haulage in the agricultural commodity supply chain segment. This outcome would enhance national capacity to improve on the implementation status of the WTO Trade Facilitation Agreement, promote the One State, One Product Initiative of the Zero-Oil Plan, bring about greater competitiveness in the AFCFTA, and deliver an overall reduction in post-harvest losses which is currently hovering between 15-50%.

There are existing capacities, policies and structures that are complementary to the operational framework of the SATS-C initiative. The stakeholders intend to factor them in as they work on the details of the policy. Some of them include the One-Stop-Shop (OSS) Policy, the Road Crime Control System (RCCS) operated by the Federal Ministry of Transport, and the Agro Ranger Operations under the Nigerian Security and Civil Defence Corps (NSCDC). New initiatives that must be taken on board by the team include Social Engineering of SATS-C ecosystem participants to prepare beneficiaries and users for the SATS-C project and Executive/Legislative Intervention to empower MDAs to expand their mandates and capacity building for stakeholders.

As a key player in the Federal Government’s macroeconomic plans, FMITI’s work on the SATS-C project is timely. Amongst other things, it will bring a coherent, harmonized tax scheme to bear on Nigeria’s agricultural logistics sub-sector which is currently leaking revenue through multiple taxation, extortion and post-harvest losses.

Speaking to journalists after attending the meeting, NIRSAL’s Managing Director/CEO, Mr. Aliyu Abdulhameed, enthused that the FMITI’s commitment to SATS-C gives him a great sense of hope. He believes that a fully operational SATS-C policy could directly lead to a 5% increase in the agriculture sector’s contribution to national GDP by halving annual post-harvest losses of $12 Billion. Further benefits, he noted, lie in the lowering of food prices, creation of 125,600 direct and indirect jobs, and the heightened possibility of adhering to standards for improved access to export, industrial and consumer markets.

Recall that as recently as last week at the 55th Annual Bankers Dinner hosted by the Chartered Institute of Bankers of Nigeria (CIBN), the Governor of the Central Bank of Nigeria and Chairman of the Board of Directors of NIRSAL, Mr Godwin Emefiele, challenged the banks to optimally harness the huge value-chain opportunities in several sectors of the economy particularly in Agriculture, saying:

“The banking sector therefore has a significant role to play as a facilitator of growth in the agriculture sector, through its intermediation function”

“Some of the opportunities in the agriculture sector that banks should explore include ways to address some of the existing gaps in the agriculture value chains, such as storage centres, transport logistics, and technology platforms, that can enable rural farmers to sell their produce directly to the markets.

“These measures would help to improve productivity of farmers, reduce post-harvest losses, increase access to finance for farmers and improve sourcing of local raw materials for processing by manufacturing and industrial firms”

Abdulhameed hopes that SATS-C would complement and perfect one of NIRSAL’s business models/concepts known as the PH-P3 (Primary Production & Harvest, Primary Processing, Primary Transportation and Primary Storage) model which ensures efficient production in the farms and optimum capture of value at harvest by enabling prompt evacuation of produce from farm-gates, and the subsequent haulage of commodities across the country through designated corridors.

SATS-C envisages the implementation of seamless movement of produce from production zones, to processing zones to markets, which Abdulhameed believes, would invariably upgrade agro-logistic value chains, flush blockages and usher in an era of increased flow of finance and investments into and through agricultural value chains. For this reason, NIRSAL is reaching out to enabler institutions, driving necessary dialogues and championing advocacy to support the FMITI in the development and implementation of the SATS-C policy in Nigeria.