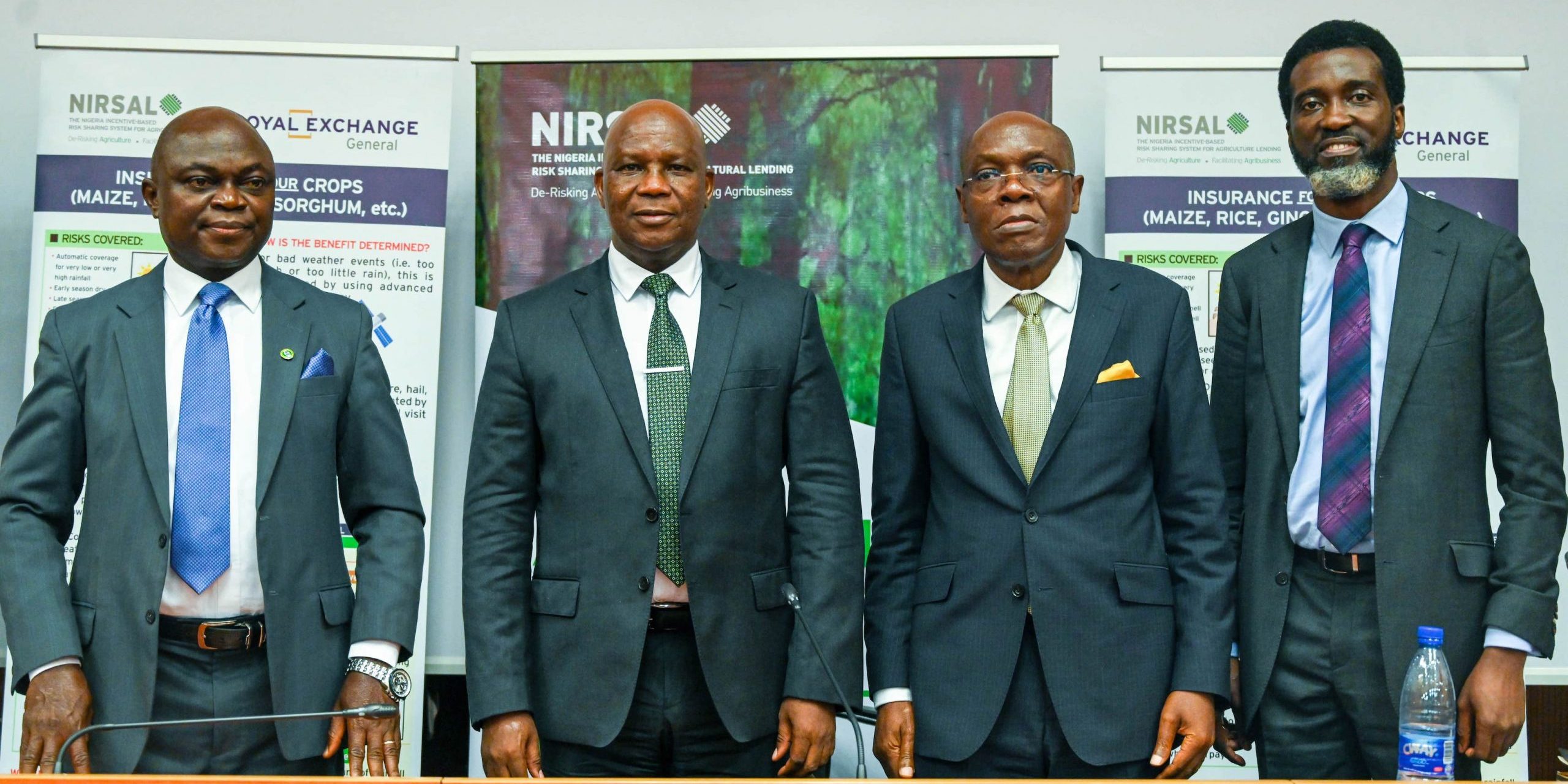 *Product will protect farmers from bad weather risks and losses

In a move that will have a significant positive impact on agricultural productivity and assured income for farmers at this challenging time, the Nigeria Incentive-Based Risk Sharing System for Agricultural Lending (NIRSAL Plc) in collaboration with Royal Exchange General Insurance Company (REGIC), has developed the Hybrid Multi-Peril Crop Indemnity-Index Insurance (HM-II).

The new product, launched at NIRSAL’s Head Office in Abuja, is an outcome of NIRSAL’s longstanding commitment to the development of innovative agricultural insurance products and expanding coverage for agricultural lending across the entire agricultural value chain.

A key advantage of the HM-II is that in cases where such risks happen, benefits paid out to the farmer would be up to the maximum loan or the insured amount after confirmation by advanced satellite technology, an assessment by an agriculture expert, or both.

The development of HM-II is in accordance with NIRSAL’s mandate to de-risk Agriculture and facilitate the flow of finance to the sector and aligns with the organization’s target of increasing distribution of existing and new Agric insurance products to 3.6 million farmers nationwide by 2026, of which, NIRSAL Plc has already reached a milestone of 1,476,289 smallholder farmers.

He added that the new product is another step towards the development of the NIRSAL Comprehensive Index Insurance (NCII) conceptualized in 2018 with  the ultimate goal of Agric insurance product development by factoring in commodity pricing parameter in the cover to be issued. Towards achieving the NCII, the launch of the HM-II marks an improvement to the NIRSAL Area Yield Index Insurance (AYII) which the corporation developed in 2017 and piloted in the wet season farming of the same year to significant effect, covering17,000 farmers and 10,000 hectares with a harvest value of N3Billion.

Abdulhameed continued: “This latest development is a testament to the progress NIRSAL Plc is making in the Agricultural insurance space. Prior to NIRSAL Plc’s intervention, private underwriters were not insuring agriculture. However, leveraging on NIRSAL Plc’s Insurance Pillar and in collaboration with the Nigerian Agricultural Insurance Corporation (NAIC) and the National Insurance Commission (NAICOM), we have brought about the inclusion of underwriters other than NAIC in underwriting Agricultural transactions and stimulated the development of new and innovative agricultural insurance products.”

He went on to commend NIRSAL Plc for always being at the forefront of agribusiness innovation and encouraged the company to continue on its upward trajectory. Yila concluded by expressing his confidence that NIRSAL Plc will continue to play a key role in the development finance functions of the CBN, it’s owner.

Also speaking during the event, Benjamin Agili, Managing Director/CEO, REGIC, described HM-II as a product that protects the smallholder farmers from farming loss including disability during a particular farming season. This, he said, guarantees sustainability and continuity, “ensuring the farmer is able to remain in business, no matter the loss or situation.”

He ended by thanking NIRSAL Plc for “the exceptional job being done to change the face of agriculture financing in Nigeria” and for giving REGIC the opportunity to partner with it on the HM-II.

On his part, Sunday Thomas, NAICOM’s Commissioner for Insurance/CEO who was represented by Leonard M. Akah, NAICOM’s Director of Policy & Regulation, stated that in line with the Federal Government of Nigeria’s (FGN) Financial Inclusion Strategy, NAICOM was eager to lend its support to the development of a product such as HM-II.

Furthermore, he noted that in order to support the FGN’s efforts in the promotion of agriculture and economic diversification, partnerships such as the one between NAICOM, NIRSAL PLC and REGIC- a partnership he described as visionary- have become inevitable.