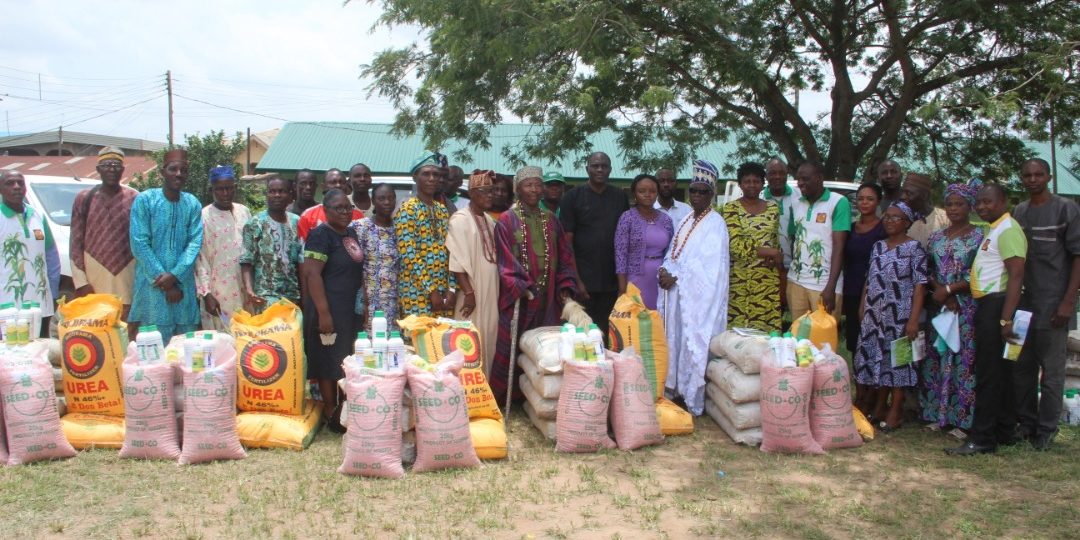 In a shift from the subsistence farming practiced in Ewekoro, Yewa North, and Ogun Waterside Local Government Areas of Ogun State, the Nigeria Incentive-Based Risk Sharing System for Agricultural Lending (NIRSAL) has organised 851 maize, rice and cassava farmers in these areas into financeable geo-cooperatives for participation in the 2019 wet season farming under the Anchor Borrowers’ Programme (ABP).

The ABP is an agricultural input loan scheme of the Central Bank of Nigeria (CBN) in which smallholder farmers receive single-digit interest rate loans in the form of inputs and pay back with portions of their produce. As a Participating Financial Institution in the programme, NIRSAL administers the ABP on behalf of the apex bank.

At a ceremony held in the premises of the Ogun State Agricultural Development Project Office, NIRSAL flagged off the distribution of inputs to the farmers in the presence of several dignitaries. During the exercise, farmers under Ode-Omi Rice Association, Ogun State Chapter of the Nigeria Cassava Growers’ Association (NCGA), and Business Support Academy (BSA) farmers received pre-emergence herbicides, certified seeds, crop protection products, NPK and Urea. Also, mechanisation service is cued for land preparation.

Speaking at the flag-off ceremony, the Head of NIRSAL’s Project Monitoring, Reporting and Remediation Office (PMRO) in Ogun State, Mrs. Jumoke Ilo stated that NIRSAL, through the ABP, is committed to addressing the challenges of smallholder farmers in the state using its end-to-end approach to agricultural projects
which spans the pre-upstream, upstream, midstream and downstream segments of the Agricultural value chain.

She added that, through the ABP, NIRSAL is addressing the problems of access to finance &amp; markets, structuring, low technical know-how and other challenges facing smallholder farmers in the state. This, she said, “was the reason NIRSAL has organised farmers into geo-cooperatives, provided them with finance components
training, and will further link them with off-takers.”

Also speaking at the event, the Permanent Secretary of the Ogun State Ministry of Agriculture, Mrs. Abosede Olaseni Ogunleye, was pleased that NIRSAL’s intervention was in line with the State Government’s third cardinal programme of Increased Agricultural Production leading to Industrialization. Industrialization she noted, “can only be achieved by supplanting subsistence farming with mechanized agriculture. The era of using cutlasses and hoes should gradually give way to the use of motorized ploughs and harrows.”

The Alaye of Ayetoro, His Royal Majesty, Oba Abdulazeez Ishola Adelakun, also in attendance at the flag- off, expressed gratitude to NIRSAL for including his kingdom in the ABP intervention. He was confident that the development would bring widespread economic growth to the state and South-West region as a whole.

The Alaye of Ayetoro further noted that “farmers have been facing challenges relating to finance, access to quality inputs and dishonest middlemen. With this intervention, coupled with support from the state government, Ogun farmers will finally experience relief and massive prosperity”.

On his part, the Chairman, Ogun State Chapter of the Nigeria Cassava Growers’ Association, Prince Akinbode Adeneye, observed that, in the past, farmers had been challenged by lack of structure, access to finance, and mechanisation. “Following the intervention of the CBN and NIRSAL, we are hopeful that we have transitioned from
agriculture to agribusiness.”

Already, thousands of smallholder farmers nationwide have received input packages for the cultivation of maize, cassava, rice, soybean, oil palm, cocoa, cotton, sorghum, sesame, and tomatoes under the ABP for both dry and wet seasons.