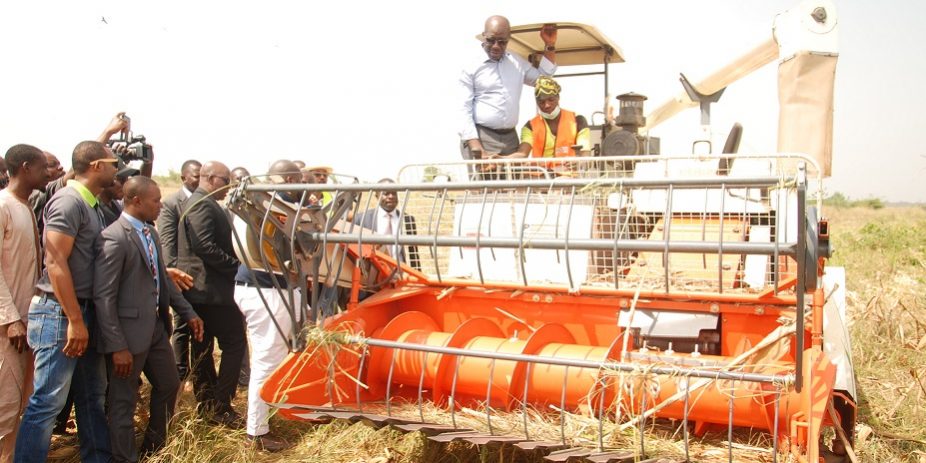 The promise of the collaboration between the Edo State Government and NIRSAL on crop production is being delivered as Edo farmers realize a 100% increase in yields and revenues from the 2019 early wet season production of Rice and Maize as a result of improved technologies, optimised operations, funding and guaranteed
markets facilitated by NIRSAL.

Initially intended for 880 farmers to cultivate 4,400 hectares of land across 18 LGAs, the early wet season project kicked off with 180 farmers cultivating 900 hectares in its first phase, with the outstanding projects to be activated in subsequent farming seasons.

NIRSAL, over the past two farming seasons, has successfully piloted its FAMSMART model in Edo, Osun, Ekiti and Kogi. To enhance the model, NIRSAL implemented its AgroGeoCooperative formation system and Mapping to Markets (M2M) framework at the production and market levels respectively for improved results.

The adoption of this comprehensive smallholder aggregation and end-to-end value chain intervention by Edo State Government, including the successful implementation of the field test case operations, has finally sealed a positive signature on NIRSAL’s models.

With the success of the Edo project, it is expected that the model would be upscaled in coming farming seasons across Nigeria to boost food production and support the Federal Government’s efforts towards agribusiness development.

NIRSAL’s collaboration with the Edo State Government serves as a practical showcase of NIRSAL’s  groGeoCooperative formation and M2M strategies which center on the aggregation of smallholder farmers based on the contiguity of their individual landholdings making up critical financeable size of 250 hectares each and
ensuring that all segments of the agricultural value-chains are linked to structured markets from Pre-Upstream (inputs and mechanization) through Upstream (farming), Midstream (processing and storage) down to Downstream (markets).

In a stepwise approach, NIRSAL first deployed its remote sensing and Farm Management and Information Capabilities to ensure that identified locations were indeed suitable for the cultivation of the proposed commodities in line with its Agricultural Commodity Ecological Area (ACEA) mapping.

With suitability ascertained, an off-take market was secured following which the farmlands and participating farmers were grouped into Agro Geo-Cooperatives using the Know-Your-Customer (KYC), Know-Your-Farm (KYF) and Know-Your-Neighbor (KYN) principles for effective production and management with each farmer owning 5
hectares of arable land.

With NIRSAL having also trained the farmers on Good Agronomic Practices (GAP), Group Dynamics and Financial Management, it meant that they were financeable, hence, each farmer’s account was credited with the loan amount in accordance with the agreed Economics of Production. The fund was to take care of land preparation, certified seeds, fertilizer, crop protection products, and farm management.

To provide comfort to financiers, NIRSAL deployed its Credit Risk Guarantee (CRG) – with which it secured 75% of the State’s risk exposure. It also layered-on the Area Yield Index Insurance (AYII) which compensates farmers for shortfalls in expected yields.

A major achievement of this collaboration is the deployment of end-to-end mechanization for all farm operations. This includes land preparation, planting, input application, harvesting and post-harvest management (PHP3). The end-to-end mechanization approach has made it possible for an average of 4 Metric Tonnes of rice and maize to be harvested per hectare; approximately a 100% increase in yield per hectare vis-à-vis the national average of 1.8 to 2 Metric Tonnes for both commodities. This invariably has doubled the farmers’ incomes.

In a recent tour of some of the farm sites due for harvest, Edo State Governor, His Excellency, Godwin Obaseki, and NIRSAL’s Managing Director/CEO, Aliyu Abdulhameed, met with some of the rice farmers in Sobe, Agenebode and Warrake areas of the state, who cultivated 355, 210 and 155 hectares respectively. More farmers and hectares will be supported under this collaboration in the coming seasons.

The NIRSAL-facilitated project is an important component of the plan of the Edo State Government under His Excellency, Governor Godwin Obaseki, to create 200,000 jobs for the people of Edo State through modern agriculture.

Governor Obaseki’s resolution to partner with NIRSAL was borne in the wake of the successful piloting of the organisation’s FAMSMART Model in Ossiomo Industrial Park on Sapele Road last October. A delighted Obaseki had pledged to collaborate more with NIRSAL to boost agriculture in Edo State, a pledge which he has begun to fulfil.

Governor Obaseki’s pledge to provide land, funds and training for farmers has also been fulfilled largely with the successful implementation of the first phase of the crop production project and NIRSAL is committed to going to scale across the entire State, leveraging on the success of this pilot.

NIRSAL is hopeful that the success being recorded with Edo State would serve as example for other Governors to follow in exploring pathways for sub-national economic growth.

For those who choose agriculture, NIRSAL exists to optimize and integrate agricultural value-chain operations and de-risk agriculture for finance and investments.

Beyond this particular project, the created Agro Geo-Cooperatives will remain, and many more will come following this model. Each Geo-Cooperative is coordinated and led by elected officials: President, Vice President and Director of Finance. The Geo-Cooperatives remain live assets for crop production and project financing and
investments open to both the private and public sectors.

Available to State governments and other borrowers in the Agricultural Value Chain are funds directly sourced from the Balance Sheets of commercial banks and other financial institutions who rely on NIRSAL’s Credit Guarantees to de-risk their finance and investments in Agriculture and Agribusinesses.

The NIRSAL M2M Model ensures all actors are locked-in in one closed financial loop as provided by the financing institutions. As a result, the movement of value from segment to segment is efficiently tracked and return on investment guaranteed to all stakeholders.